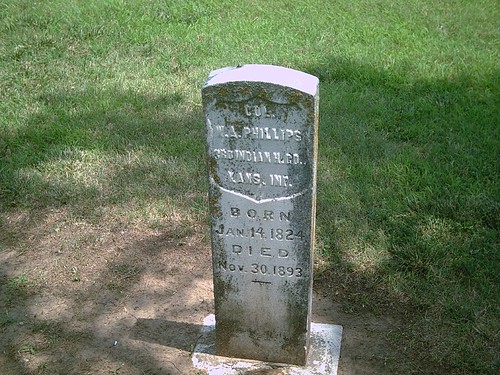 Colonel, 3rd Indian Home Guard, Kansas Infantry
William Cutler wrote the following about this gentleman:
WILLIAM A. PHILLIPS, is of Scottish birth, but immigrated with his father when a boy to Randolph County, Ill. On reaching man’s estate he practiced law and edited a newspaper in Chester, Ill., and at the same time contributed to many newspapers and magazines. He wrote several books, among them "Scenes and Characters of Backwoods Life," "Paul Persimmon " and the "Conquest of Kansas." In the spring of 1855, he became a member of the New York Tribune staff, for which paper he had contributed for several years. In that year he went to Kansas as their Kansas correspondent and for several years after, and has often written editorials and other articles for it and other papers since. In 1857, he conceived the idea of founding a colony, and made a journey of many hundred miles, early in the spring of that year with a Mr. Smith, for a companion. He examined the valleys of the Smokey Hill, Solomon, Republican and Blue rivers, and from these observations determined on the location near where Salina now stands. In February, 1858, he made the location of the town site and it was surveyed and building at once commenced. His first two companions in fixing the town site were A. M. Campbell and James Muir. These were reinforced by many other colonists. The original town company as first organized was composed of Messrs. William A. Phillips, A. M. Campbell, James Muir, A. C. Spillman, Robert Crawford and David L. Phillips, to these were added Rev. Wm. Bishop, Ransom Calkins and Dr. Lull. The title of the town site was obtained in 1863. Col. Phillips in addition to being the general business agent for the company met the greater portion of the expense incident to its early history. In 1858 he had a large double log house built for a hotel. It stood on the southwest corner of Iron avenue and Fifth street. He also placed the first store or stock of goods in town. There was no store nearer than Junction City at that time . In 1859 he purchased and hauled to Salina a grist and upright and circular saw mill. In that year he built a frame hotel building on the north west corner of Santa Fe and Iron avenues, hauling the pine lumber, doors, window sash, etc., from Kansas City and Leavenworth. He at different times has erected many other buildings in town, and has constantly, by money influence and labor striven to build up the town he had founded. When the war broke out he at once enlisted, raised the Third Kansas and tendered it to President Lincoln and it was accepted. On its consolidation he was appointed by President Lincoln, Major of the First Indian Regiment which he accepted as the command was marching immediately to the front. In July, 1862, he was promoted to Colonel of the Third Indian, a Cherokee Regiment. A month later he had command of the Indian Brigade. That command was composed of civilized Indians, who were uniformed and drilled like white troops. It contained two regiments of Cherokees, one of Creeks, with battalions and companies of Seminoles, Uches, Natches, Shawnees, Delawares and Osages. At the close of 1862, Colonel Phillips under instructions from Washington, reorganized the Indian command on a more thorough and intelligent plan. January 5, 1863, he received from General Schoffield, command of a division in the field, including the Indian troops, parts of the Sixth and Ninth Kansas, Hopkins’ Battery, the First Arkansas Battery, the First Arkansas Cavalry, and Fist and Second Arkansas Infantry, the Tenth Illinois and Third Wisconsin and other commands. In the same year he received command of two Districts, the western half of Arkansas and the Indian Territory. He continued in command of a separate army in the field until the war closed, and took part in nearly all the engagements that were fought in that country; the command fighting its way to hold the line of that river. He made several expeditions from that point south, and was generally successful as a Commander. He received three slight wounds, none of which forced him to leave the field, and had four horses killed under him in battle. At the close of the war he returned to build up Salina, which at that time looked somewhat dilapidated. The building of the Pacific Railway was secured and from that time Salina grew steadily. Col. Phillips has held several public positions of distinction. He took part in all the early conventions in the State, was a member of the Legislature, spokesman of the Kansas Delegation in Chicago, in 1860, was elected to the Forty-third Congress, having received the nomination of the Republican party by acclamation; was re-elected to the Forty-fourth and Forty-fifth Congresses, serving with distinction. The most notable public measures supported by him were amendments to the land laws, timber culture, postal savings banks and postal telegraphy, the retention of legal tender and restoration of silver coinage.