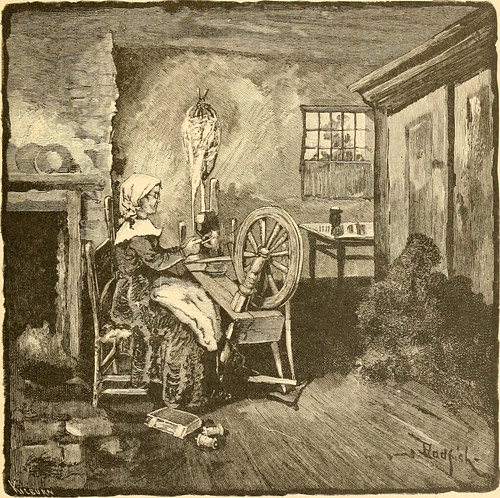 Text Appearing Before Image:
go Lawrence was a mere handful of houses;Manchester was no better. When the census was taken in 1820,the country around Lowell was a wilderness where sportsmen shotgame. The falls which now furnish power to innumerable loomswere all unused, and the two hundred sole inhabitants of the townfound their support in the sturgeon and alewives taken from thewaters of the Concord and the Merrimac. At that time no manufactories could be said to exist with theexception of a few mills for making paper, scarce so good in qualityas that grocers are now accustomed to wrap around pounds ofsugar and tea; a foundry or two where iron was melted into rude,;igs, or beaten into bars of iron ; or a factory where cocked-hatsand felts were made. IN THE TRAIN. 35 As for cotton manufacture, the first cotton mill was not erectedin New England at the time the Constitution was formed. Theplace now held by cotton fabrics was filled by linen spun at everyfarmers hearth. To spin well was then esteemed an accoraplish-

Text Appearing After Image:
THE SMALL WHEEL. ment, like playing on the piano, or painting china at present, andevery damsel of the old time was proud to excel in it. The spinning bee was once the fashion among the rich; it continuedin vogue in many country towns when the ladies of the great 36 A FAMILY FLIGHT AKOUND HOME. cities had deserted the wheel for the harpsichord and the spinet.The bee was generally held in the town hall; but if the villagewas not prosperous enough to contain such a building, the houseof some minister was chosen. Thither the women went with theirspinning-wheels and flax, and as they spun were brought cake andwine by the fine gentlemen of the town. All this spinning is done away with by the introduction ofmachinery, and flax and linen have yielded for most householdpurposes to cotton and cotton goods. Did you ever see a spinning-wheel.? Mr. Horner asked ofHubert. Hubert was doubtful. Aunt Augusta has one, answered Tom, in a corner of herparlor, all tied up in blue ribbon like a pet dog. I