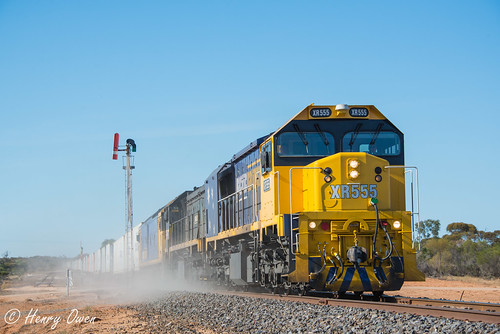 Charging away from Hattah past an un-operational home semaphore signal, XR555 leads X44 and G527 North bound with 9101 empty Mildura ‘Fruity’ goods to Merbein (near Mildura)

Semaphore signals are rapidly become a thing of the past, with only a handful remaining on the Yelta line at Ouyen and Hattah (only for show). Barnes in NSW on the Deniliquin line is the last operational semaphore signal on the Victorian BG network.

During 2015, the Victorian State Government announced a plan to convert sections of the Yelta line into Standard Gauge along with building brand new lines connection regional areas to ports faster and effective. Trains like 9101/9102 Mildura goods could be a thing of the past come 2016.