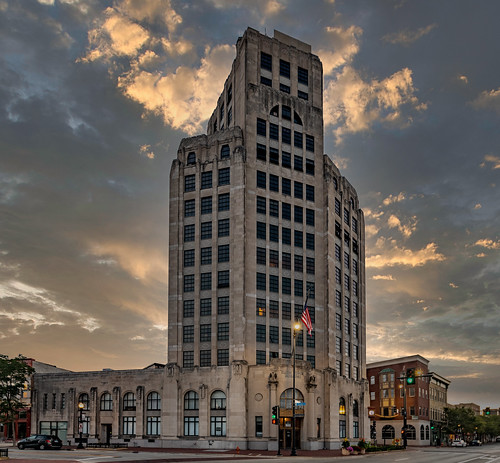 The Elgin Tower Building, originally the Home Banks Building, is a historic office building in downtown Elgin, Illinois. The tower is 186 feet tall and 15 stories. It was built in 1929 to house the Home National Bank and Home National Savings and Trust. Though initially successful, the Great Depression devastated the bank only months later. The tower was again prosperous following World War II, when demand for Elgin goods increased. However, this prosperity was only temporary, and the tower again fell on hard times in the 1960s, particularly after the 1965 closing of the Elgin National Watch Company. The tower was eventually purchased by William R. Stickling, who went to great lengths to restore it. It was donated to a charity named in his honor following his 1999 death, and the William R. Stickling Charitable Foundation continues to maintain the structure. Its restoration is considered a major part of a hopeful rehabilitation of downtown Elgin. The tower is one of only two Art Deco buildings in Elgin and was added to the National Register of Historic Places in 2002. An elevator in the building that had a wooden interior was destroyed by arson on May 4, 2014. The building was then purchased in 2016 by Capstone Development and renovated into apartments.