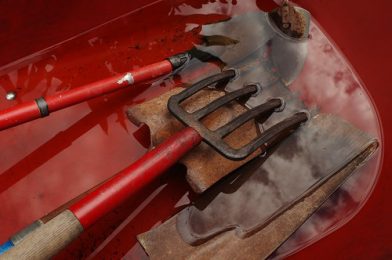 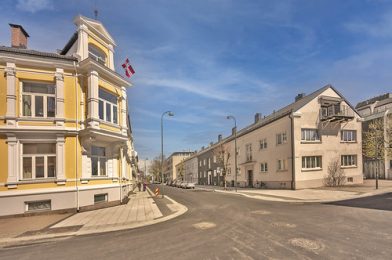 From google translater:
I know that my own family lost their home here in Østre Strandgate during the city fire on June 8, 1892.
The disaster was a fact: A total of 350 houses and outbuildings of the finest wooden buildings in Kristiansand were gone. 4000 people became homeless.
"By the time the fire brigade arrived, the outbuildings in Rasmussens Gaard were already in hats." it says in the fire department’s watch journal from June 8, 1892.
It was three o’clock in the afternoon, the place was Markensgate 11. The crews at the lookout post in Baneheia notified the fire brigade at Øvre Torv about smoke development.
"Whereupon there was an immediate outcry with the Snake Carriage and Crew." it is called in the journal.
The fire quickly took hold of the neighboring houses, and the strong, north-westerly wind drove the fire through the city and east towards Otra. People tried to salvage movables and household goods, without much success.
The mighty sea of ​​flames made the sky light up from Mandal in the west to Arendal in the east. On the opposite side of the river, the sparking rain was so strong that people had to keep watch over their houses.
"In front of the fire front, wave after wave of lead gray and black smoke rolled over, so there was a eerie semi-darkness in the streets. It was like an experienced Pompeii’s downfall. I myself helped save the contents of a house in the middle of the fire district. "In my recollection, it is precisely the semi-darkness, the sour smoke and the rumble of the rushing sea of ​​fire. And there was a feeling of shortness of breath, for the air was dangerously hot, almost suffocating, even a whole block before the fire."
The next morning, Kristiansand’s inhabitants could look out over a city where a third of the buildings were gone. Values ​​for millions went up in smoke, and the fire service’s watch journal says that a total of 350 buildings burned down, "at a total fire rate of 3,700,000 kroner". In the previous city fire, the cathedral had burned down; this time it was spared from the flames. However, a large area in the city was reduced to ashes, including Christiansholm Fortress, Tresse and several facilities at Østre Havn. Norges Bank’s building, Sparebanken, fire station, post office and telegraph station were among the buildings that were the prey of the flames.
As the fire broke out in broad daylight, several valuables were salvaged, including mail at the post office and several different archives. The timing of the fire was a contributing factor to the loss of life. Two of the regular fire crews were badly injured during the fire; "One by crashing down from a rooftop", while the other got both Hands and Face badly burned ". In addition, several others in the fire brigade are said to have sustained less serious injuries. The next day, the watchdog reports that "every man [was] engaged in post-extinguishing work."
The city fire in 1892 is the largest and most devastating that has ever hit Kristiansand. The consequence was that the city council introduced coercion in the entire fire district and conditional coercion in the rest of the city, which significantly changed Kristiansand from a "wooden town" to a "brick town". This, together with a reorganization of the fire service, has contributed to Kristiansand not later becoming a victim of an urban fire.
The catastrophe could have been even greater if the city’s new cathedral had not stood as a wide, protective wall against the northeastern part of the city. There was great anxiety that the flames would reach the ammunition in the Retranchement (Tresse) and at the Fortress. The soldiers removed most of it, but some had to be thrown into the sea.