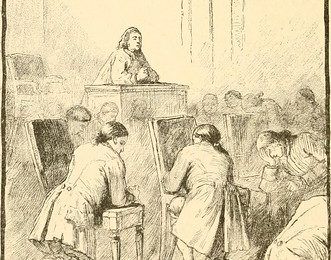 Text Appearing Before Image:
sing businessto arrange, and could not leave home until it was settled. Marchwas nearly over before the thirtieth representative arrived. Therewas now a quorum, and the House organized on the thirteenth ofMarch ( 1789). But now a new delay arose. Nothing could bedone till the Senate also had a quorum, and another week wasimpatiently passed in watching every stage-wagon that came to thecity, and asking the name of every traveller. At last, on themorning of the sixth of April, a messenger knocked at the doorof the House and informed the Speaker that the Senate wasready to count the electoral vote. The members hastened to theSenate Chamber, and the ballots were opened, read off, andrecorded. The Houses then separated. When the Representativeswere once more in their seats, the Speaker announced the result.George Washington had received sixty-nine, John Adams thirty- 286 A FAMILY FLIGHT ABOUND HOME. four votes. Thus were elected the first President and Vice-Presi-dent of the United States.

Text Appearing After Image:
MKST IKAVKK IN CUNUKKSb. The two Houses of Congress had their hands full of other busi-ness at once, and advice of all kinds was showered upon them, CONGRESS. 287 especially upon the subject of the importation of British goods.It was said that if the country was to prosper, it must spend less•on foreign goods, and learn to manufacture its own. It wasplainly the duty of Congress to spare no pains to restrain impor-tation and encourage home manufacture. The advice was sound, and had begun already to be acted on by thepeople. In every great city so- s- . ^ -^ cieties for the encouragement ofmanufactures were flourishing.The members of the society inDelaware took a solemn pledgeto appear on the first day ofJanuary, in each year, clothedin goods of American make. The result of such resolveswas a speedy return to oldhabits of simplicity and frugality.Young women wore plain clothes,and made haste to surpass theirmothers in skill at the spinning-wheel. Young men were notashamed to be seen i