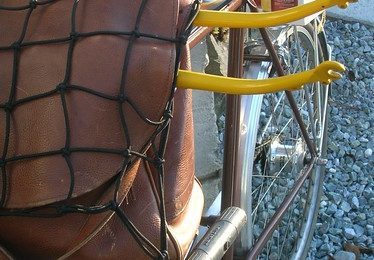 front bag: my work stuff, lunch containers, and the fork for the all-rounder, now re-aligned (thanks Colin!)
rear box: plums! (thanks Lloyd!) 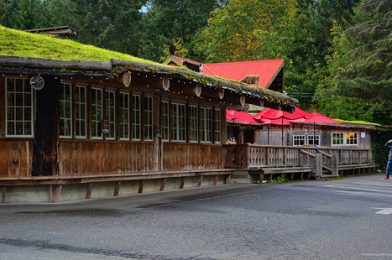 Home of the Goats on the Roof….

The Old Country Market in Coombs is famous for their international foods, imported gifts, in store baked goods, and of course… ice cream.

They also have a restaurant, a deli and fresh produce all under the roofs of their recently renovated market. Up the hill is our fabulous Cuckoo’s Trattoria and Pizzeria in the Big Villa at the back, as well as the take-out style Mexican cantina "Taqueria".

About the Goats on the Roof:

The goats of the Old Country Market are a very important part of their family. Thousands of people come to the small town of Coombs every year for a glimpse of the four legged ’employees’… and they certainly are not camera shy!

If not resting in their Norwegian-style log house in the middle of the roof, they more than likely can be found munching on the grass, or sneaking a peek of unsuspecting tourists eating their own lunches!

One of the first animals to be domesticated, around 10,000 years ago, goats are sometimes referred to as the ‘poor man’s cow’ for their extensive utility and affordable cost of maintenance. They certainly help out by ‘mowing’ the grass.

They are found in nearly three hundred distinctive breeds, ours are pygmies. A female goat is known as doe or nanny, and males are either wethers or billies. An infant goat is known as a kid and is called so until it grows into a fully formed adult.

Goats are known to have good co-ordination and are quite good climbers, able to hold their balance even in the most unstable places such as steep mountains, rocks, even trees… and of course roofs!