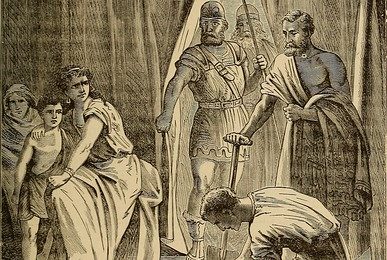 Text Appearing Before Image:
sed allthat he had done; that he had stolen at Jericho a splendid robe anda lot of silver and cmld, all of which he had buried in his tent. How could he do that and his family not know it? asked Carrie. They did know it, but they concealed it—though they knew itwas a great sin. Joshua then sent messengers to Achans tent, andthere they found the buried treasures—just as Achan had said. Oh, my! sighed Carrie; what did they do with poor Achan? Achan, with all his property and his family, was led out into avalley near by. He and his people were then stoned to death andtheir bodies, with all the property, were burned. That was the ter-rific manner in which God punished the theft of goods which hadbeen set apart for Him. That was awful! said Mary; but it does seem that they de-served it. It does, assented Grandpa. When this had been done, Godsent Joshua once more against Ai, and he captured it easily. So wesee that victory follows obedience, while disobedience and defeatgo hand in hand.

Text Appearing After Image:
FINDING THE STOLEN TREASURE. 210 GRANDPA GOODWINS STORIES. DIVIDING THE INHERITANCE: Or, REALIZING A GREAT POSSESSION. ~ 7AS Joshuas trouble over when Ai was conquered? asked// Marv> taking up the thread of the last nights conversa-* * tion. It seems to me it was about time for him to findsome rest.: By no means, my dear, her Grandpa replied— by no means.One of his Greatest battles was with the soldiers of no less than fivekings, who combined to help each other against him. But Joshuamoved quickly, forced his marches, and came upon them quite un-expectedly at Gibeon. He soon put them to flight, and as they rana terrible hail-storm came up and so pelted the fleeing men that manyof them were actually beaten to death. Still Joshua pursued. Nightwas coming- on, so he commanded the sinking sun to stand still whereit was that daylight might last and the enemy be completely de-stroyed. God heard that command of Joshua; the sun did standstill; the day was prolonged; and the armies o