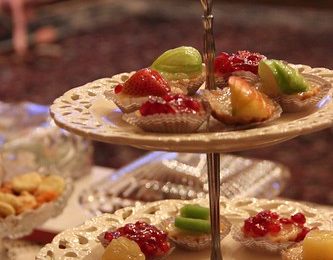 Text Appearing Before Image:
foot in Egypt. The high road now runs beside the railway allthe way to Cairo, and it displays a large amountof traffic; there is a continuous succession of per-sons carrying goods, or with laden donkeys, orstrings of camels, tied one behind the other byropes, and generally carrying immense bales ofcotton. I have counted as many as eighteen camelsthus fastened together, and pacing, in their heavy, 38 UP THE NILE. melancholy gait, at the rate of three miles an hour.The cotton plant is much cultivated here, and thefields in which it grows look very much like aFrench vineyard, the height and general charac-teristic of these plants bearing much resemblance toeach other. The pods were bursting with ripe cottonin December when I passed through the fields.The castor-oil plant is also cultivated to a greatextent; the whole fostered by artificial irrigation,at which we shall see very many of the labouringclasses employed, and fully describe in a futurechapter. The Damietta branch of the Nile is

Text Appearing After Image:
crossed near the town of Bena-el-assal; and after-wards, passing the large town of Kalioub, we see noothers till Cairo comes in sight. Twenty miles onthis side the city the immense masses of the Pyramidsof Ghizeh are visible. As you rapidly approachthe city by the direct line of the rail, they increasein grandeur, and the position of Cairo becomes ALEXANDRIA TO CAIRO. 39 apparent. A rapid sketch from the window of therailway carriage/which I here reproduce, will givea general idea of this striking approach to the banksof the Nile. To the spectators left is the MountMokattam and the citadel; half way up the hillside is the dome and minarets of the great mosque,built by Mohamed Ali. The minarets of the town,and the town itself, are nearly hidden in the grove ofdates and acacias below. The Pyramids of Ghizehare on the opposite bank of the river; the rangeof hills beyond part Egypt from the deserts ofAfrica. The view therefore comprises the entirebreadth of the country, the Nile flowing t