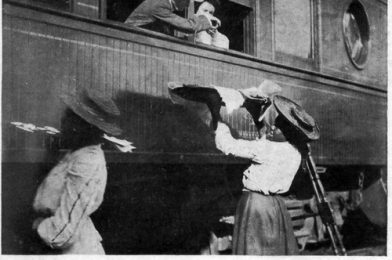 Waiter carriers pass food to passengers on a train stopping in Gordonsville, Virginia, in this undated photo. After the Civil War, local African-American women found a route to financial freedom by selling their famous fried chicken and other home-made goods track-side. [Photo: Town of Gordonsville]

Fried chicken is a racially fraught food. Historically, it’s been associated with racist depictions of African-Americans, and today, some still wield the fried-chicken-eating stereotype as an insult. But in some cases, the food itself has provided a path toward financial freedom for blacks.

Take the town of Gordonsville, Virginia, for example. As Lauren Ober of NPR member station WAMU recently reported, in the latter half of the 1800s, the town gained fame as the "Fried Chicken Capital of the World." And the reasons why date back to the rise of the railroad.

By the time the Civil War broke out, the town was a main stop on two rail lines. It was also a major transportation hub for produce coming from Virginia’s Shenandoah Valley.

But those trains didn’t have dining cars, and local African-American women found a business opportunity in hungry passengers. The women would cook up fried chicken, biscuits, pies and other tasty goods and sell them from the train platform, passing the food over to passengers through the open windows.

These vendors, known as waiter carriers because they had to transport the food a long way to get to the station, developed a reputation for their culinary skills, according to Psyche Williams-Forson, an associate professor of American Studies at the University of Maryland.

"Some people would deliberately chart their way through Gordonsville because they knew they would encounter these women and those particular foodstuffs," Williams-Forson tells Ober.

For the waiter carriers of Gordonsville, fried chicken became an avenue of economic empowerment after the Civil War. The title of Williams-Forson’s 2006 book, "Building Houses Out of Chicken Legs: Black Women, Food and Power," is a nod to this entrepreneurial legacy: Bella Winston, an 80-year-old former waiter carrier, who learned the trade from her mother, told a local newspaper in 1970, "My mother paid for this place with chicken legs."

"At the end of the Civil War, when we have new freedoms for people, they’re put in a position where they need jobs," says Coiner, whose family has lived in Gordonsville for many generations. "The situation was bad before, but you could count on the situation. Now it was a big unknown."

The waiter carriers were part of a larger tradition of African-American women who found economic independence — in some cases even buying their own freedom — through their cooking skills. Indeed, one of the first cookbooks published by a black woman in America was put out by an ex-slave woman in 1881.

Williams-Forson writes that the historical record is sparse when it comes to Gordonsville’s fried chicken vendors. But, she tells Ober, "I think it’s important to talk about it, because it reflects some level of agency that some African-Americans were able to exhibit during that horrible institution."

Of course, fried chicken is a particularly racially charged dish. To wit: the Coon Chicken Inn, a restaurant chain begun in Salt Lake City, Utah, in 1925, that was popular for its fried chicken. The decor was as racist as the name. The caricature of a black man with grotesquely oversized red, open, smiling lips, a porter’s hat askew on his head, was ubiquitous: on silverware, menus, matchbooks and other advertising. Customers had to walk through a giant version of those grinning lips to enter the restaurants.

"Back in those days … it wasn’t nothing to see such mockery. Black folks was always being mocked," according to former headwaiter Roy Hawkins, whose recollections of working there appear in Williams-Forson’s book.

As for the waiter carriers of Gordonsville, their trade disappeared in the first half of the 20th century, as dining cars were added to trains and government regulations cracked down on track-side food vendors. But their legacy lives on in Gordonsville, which hosts an annual fried chicken contest.

Info: Lauren Ober’s report on Gordonsville’s fried chicken tradition aired on member supported radio station WAMU in Washington, D.C. You can listen to a longer version of that story, which details other ways that African American women have found economic empowerment through food, from Gravy, the podcast from the Southern Foodways Alliance.