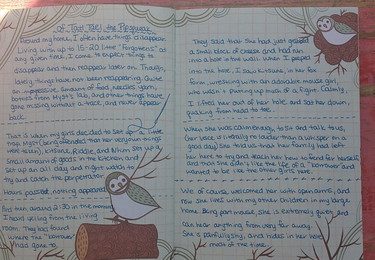 Around my home, I often have things disappear. Living with up to 15-20 little "Forgottens" at any given time, I come to expect things to disappear and then reappear later on. Though, lately, things have not been reappearing. Quite an impressive amount of food, needles, yarn, bottles from Myst’s Lab, and other things have gone missing without a trace, and never appear back.
That is when my girls decided to set up a little trap. Myst (being offended that her very own things were taken), Kitsune, Riddle, and Nhim set up a small amount of goods in the kitchen and set up an all day and night watch to try and catch the perpetrator. Hours passed, nothing appeared.
And then, around 2:30 in the morning, I heard yelling from the living room. They had found where the "borrower" had gone to. They said that she had just grabbed a small block of cheese and had run into a hole in the wall. When I peeped into the hole, I saw Kitsune, in her fox form, wrestling with an adorable mouse girl, who wasn’t putting up much of a fight. Calmly, I lifted her out of her hole and sat her down, quaking from head to toe.
When she was calm enough to sit and talk to us, (her voice is literally no louder then a whisper on a good day) she told us that her family had left her here to try and teach her how to fend for herself, and that she didn’t like the life of a "borrower" and wanted to be like the other girls here.
We of course welcomed her with open arms, and now she lives with my other children in my large home. Being part mouse, she is extremely quiet and can hear anything from very far away. She is painfully shy, and hides in her hole most of the time.