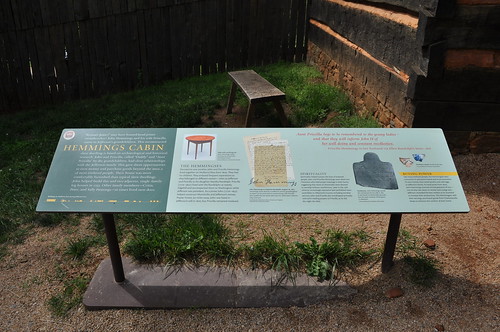 “Servant’s house t’ may have housed head joiner (woodworker) John Hemmings and his wife Priscilla, nurse to Jefferson’s grandchildren. This reconstructed slave dwelling is based on archaeological and historical research. John and Priscilla, called ‘Daddy’ and Aunt Priscilla’ by the grandchildren, had close relationships with the Jefferson family. This gave them opportunities to earn money and purchase goods beyond the means of most enslaved people. Their house was more comfortably furnished than typical slave dwellings. John helped build this and two adjacent, single-family log houses in 1793. Other family members – Critta, Peter, and Sally Hemings – at times lived next door.”

“Devoted to one another, John and Priscilla Hemmings lived together on Mulberry Row from 1809. They had no children. They endured frequent separations as they belonged to different owners – John to Jefferson and Priscilla to his daughter Martha Randolph. Priscilla (1776-1830) lived with the Randolphs at nearby Edgehill and accompanied them to Washington while Jefferson was president. As a joiner, John (1776-1833) helped construct Monticello and Jefferson retreat, Poplar Forest, 90 miles away. John was freed in Jefferson’s will in 1826, but Priscilla remained enslaved.”

“Spirituality helped sustain the lives of enslaved people. John and Priscilla Hemmings were observant Christians who held prayer meeting in their home, suggesting that slaves at Monticello were allowed to worship without interference. Later in the 19th century, increasingly repressive laws prohibited slave assemblies in Albemarle County, including worship services. John and Priscilla also worshiped privately, with John reading prayers to Priscilla, as he did the night she died.”

“Like many enslaved people, the Hemmingses were consumers in plantation-based and local economies. To earn money, they raised poultry and sold eggs to Jefferson’s family. As head joiner from 1809, John Hemmings received annual gratuities of $20 – one of only two slaves to receive such a large sum. Jefferson rewarded the best workers as an incentive to increase their productivity. The Hemmingses, with their earnings, purchased goods from Charlottesville shops to enhance the comfort of their home.”

Upper right in brown print:
“Aunt Priscilla begs to be remembered to the young ladies – and that they will inform John H of her well doing and constant recollection.’ Priscilla Hemmngs to her husband via Ellen Randolph’s letter, 18186”

Beside table photograph:
“Table with revolving top. John Hemmings made furniture for Monticello and Poplar Forest.”

Beneath document:
“John Hemmings to Septimia Randolph, August 28, 1825. Hemmings wrote directly to Jefferson and his granddaughter to report on his work and to communicate with Priscilla. John spelled his last name with two m’s, while other relatives only used one.”

Below headstone:
“Tombstone. John Hemmings carved this tombstone for his wife in 1831. It was found on Monticello grounds, but the exact location of her grave is unknown.”

Under upper right pottery:
“Pearlware vessels, found on this site.”